The Prince of Wales Feathers

The Prince of Wales’s feathers is the heraldic badge of the Prince of Wales. It consists of three white ostrich feathers emerging from a gold coronet. A ribbon below the coronet bears the motto Ich dien (a contraction of the German for “I serve”, ich diene). As well as being used in royal heraldry, the badge is sometimes used to symbolise Wales, particularly in Welsh rugby union and Welsh regiments of the British Army.

Technically the badge should be described as the Duke of Cornwall’s feathers, as the badge is that of the eldest son of the Sovereign whether he has been invested or not as the Prince of Wales.

Origins of the badge:

The badge has no connection with the native Princes of Wales.

Its use is generally traced back to Edward, the Black Prince (1330–1376), eldest son and heir apparent of Edward III. Edward bore (as an alternative to the royal arms) a “shield of peace” bearing three ostrich feathers probably the shield he used for jousting. These arms can be seen several times on his tomb chest in Canterbury Cathedral, alternating with his royal arms. The prince also used badges of one or more ostrich feathers in other contexts.

The feathers first appeared at the marriage of Edward III to Philippa of Hainault, and the Black Prince probably inherited the badge from his mother. Philippa was descended from the Counts of Hainault, whose eldest son bore the title “Count of Ostrevent”, the ostrich feathers being (perhaps) a heraldic pun on that name.

Alternatively, the badge may have derived from the Counts of Luxembourg, from whom Philippa was also descended, and who had used the badge of an ostrich.

Edward III occasionally used ostrich feather badges, as did other members of the royal family in the 14th and 15th centuries. These included The Black Prince’s younger brother, John of Gaunt, Edward’s illegitimate son, Sir Roger de Clarendon, and his legitimate son, King Richard II. Henry IV used a badge of a single ostrich feather as did some of his sons, including Henry V,  Thomas, Duke of Clarence,  John, Duke of Bedford and Humphrey, Duke of Gloucester.

The first Prince of Wales to use the badge in its modern form (i.e. three white feathers encircled by a coronet, and with the motto Ich dien) was Prince Arthur (1486–1502), eldest son of Henry VII, at the beginning of the 16th century. It was also widely used by Prince Edward, son of Henry VIII and afterwards Edward VI, although he was never formally invested as Prince of Wales. Feathers continued to be used as lesser royal badges, by Elizabeth I among others, until the end of the century. Only from the beginning of the 17th century did the badge become exclusively associated with the Prince of Wales.

Popular accounts of the origins:

According to a longstanding but now discredited legend, the Black Prince obtained the badge from the blind John I of Bohemia, against whom he fought at the Battle of Crécy in 1346. After the battle, the prince is said to have gone to the body of the dead king, and taken his helmet with its ostrich feather crest, afterwards incorporating the feathers into his arms, and adopting King John’s motto, “Ich Diene”, as his own. The story first appears in writing in 1376, the year of the Black Prince’s death. There is, however, no sound historical basis for it, and no evidence for King John having used either the crest (he actually bore a crest of vultures’ wings) or the motto.

Since a key factor in the English army’s victory at Crécy was the use of Welsh archers, it is also sometimes said to have been Edward’s pride in the men of Wales which led him to adopt a symbol alluding to their assistance. The German motto “Ich Dien” (“I serve”) is a near-homophone for the Welsh phrase “Eich Dyn” meaning “Your Man”, which might have helped endear the young Black Prince to the Welsh soldiers in particular. Again, however, there is no historical evidence to support this theory.

Representations of the badge:

Over the centuries the badge has been depicted in several different forms of which a number are illustrated below. 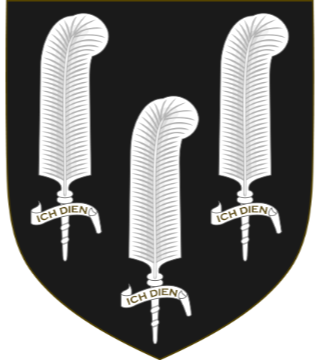 The Black Prince’s Shield of Peace 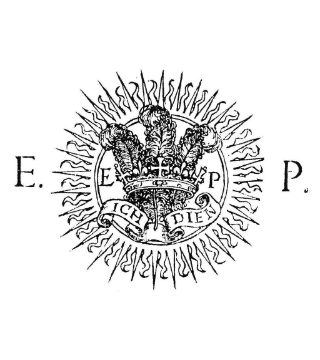 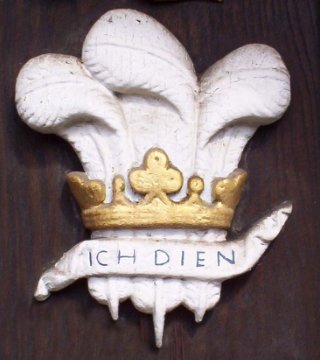 As used currently by the Prince of Wales Lodge 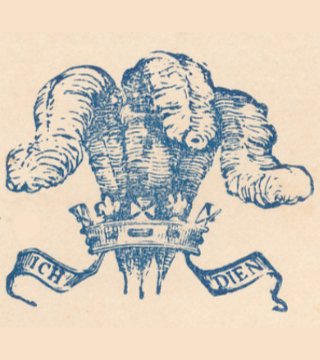