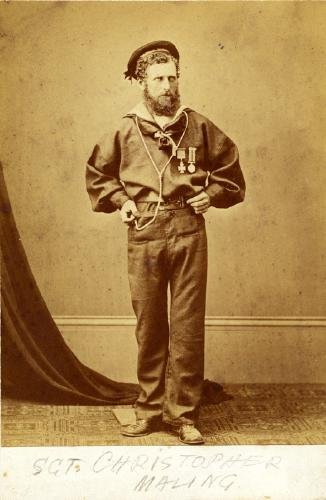 Christopher Maling was born around 1841 and came to New Zealand on the Martha Ridgeway when about 1 month old with his parents and sister Elizabeth. On 17 June 1843, his father Thomas Audros Maling, Chief Constable at Nelson, was killed in the Wairau Incident.

Their mother also having died, the two children were brought to Auckland by Bishop Selwyn to be brought up by Captain and Mrs David Rough. Christopher stated he attended St John School although there is no record of his enrolment in that or other schools (but the records of the time are very incomplete).

In 1856 Captain Rough was appointed Collector of Customs, Nelson so the family moved there. At the age of 15, Christopher joined the provincial survey team and was part of a number of surveys including:

1857: Assisting Henry Lewis in laying out the town of Collingwood when the gold diggings started.

1859: Assisting Ferdinand von Hochstetter who was in Nelson with Julius von Haast. A large number of moa bones had been found in caves in the Aorere Valley which Maling and von Haast dug out, washed and conveyed to Collingwood.

1859: Assisting Alfred Dommett (Nelson Provincial Secretary) and John Blackett (Nelson Provincial Engineer) to travel from Nelson to Canterbury to inspect the proposed line of a Middle Road. The route was through the Wairau Gorge to Jollie Pass, near Hamner. Whilst at Lake Tennyson, en-route, Maling noted a low pass heading westward.

1860: In February, Nelson lawyer William Travers set out to explore the upper reaches of the Waiau River and find a route through to the Grey River. He was accompanied by Maling who pointed out the pass he had noted the previous year which, on being explored, led to the upper Waiau. The pass was then named Maling Pass.

1860: In March Maling was sent back with Henry Lewis to continue the search for passes. Having gone south through Cannibal Gorge to the Maruia, they returned through what is now known as Lewis Pass.

1862: He was attributed by the then Director of the Royal Botanical Gardens at Kew with the discovery of a new plant species; Trichomanes malingii (“Mr Maling’s Trichomanes”) now known as menophyllum malingii.

Maling left Nelson and worked as a surveyor in Southland and the Waikato. He then served in the New Zealand Wars as a scout in the Corps of Guides (a very small unit of advance scouts – only fifteen men of whom three were killed and four wounded) in the Wanganui – Taranaki region under Colonel Whitmore and up to the end of the campaign in Taupo.

For his services he was awarded the New Zealand Cross, the citation for which reads:

“For most valuable and efficient services as Sergeant of the Corps of Guides on many occasions, and especially in going out to scout in advance with three men (two of whom were shot on the morning of the 26th February 1869), by which an intended ambuscade was discovered, and many lives saved. And for a long reconnaissance with two men of the Corps of Guides (which lasted two nights and days) in advance, to ascertain the direction of Titoko-Waru’s retreat after he had evacuated Tauranga-ika. This service was a most daring one, and of the utmost importance to the force, as intelligence was thus obtained which in no other way could have been procured.”

After the war, Maling was involved in the survey and construction of telegraph lines from Tauranga to Grahamstown (now Thames), Hawera to New Plymouth, Nelson to the Buller, Auckland to Manganui and in the Opotiki and Taupo country.

He travelled to Japan in an offical capacity to offer assistance with modern methods but the expected work was not contracted for. He then travelled to England where he was expecting to be engaged to work on the Cape to Cairo railway project. As that was delayed he worked on telegraph installation in the back country of the Cape under Sir James Sievwright. He returned to England only to return to Africa as intelligence officer for Lord Methuen in the Bechuanaland campaign.

He then travelled to South America where he prospected the Parana River (which runs through Brazil, Paraguay and Argentina) and in Venezuela, which he had to leave abruptly due to one of their revolutions.  He settled in Florida where he was a planter, with trips back to England. He died in England in 1916.

During one of his trips back to England, he was profoundly upset by the publication of the book “With the Lost Legion in New Zealand” by  a Colonel “Maori” Browne which seemed to be closely based on notes taken from his own exploits during the New Zealand Wars but which were critical of the Corps of Guides in which the Col. Browne did not, as he recalled, ever serve.

His New Zealand Cross is now part of the Royal Collection at Windsor Castle.

Christopher Maling was initiated into the Prince of Wales Lodge on 31st July 1879.

On 10 March 1869, without checking the facts and under the mistaken impression colonial troops were not eligible for the Victoria Cross unless under command of British troops, the Governor of New Zealand, Sir George Bowen, instituted the New Zealand Cross as the highest New Zealand award.

He was widely criticised in England, and accused of usurping the prerogative of Queen Victoria, but she eventually ratified his action.

Only 23 New Zealand Crosses were awarded.