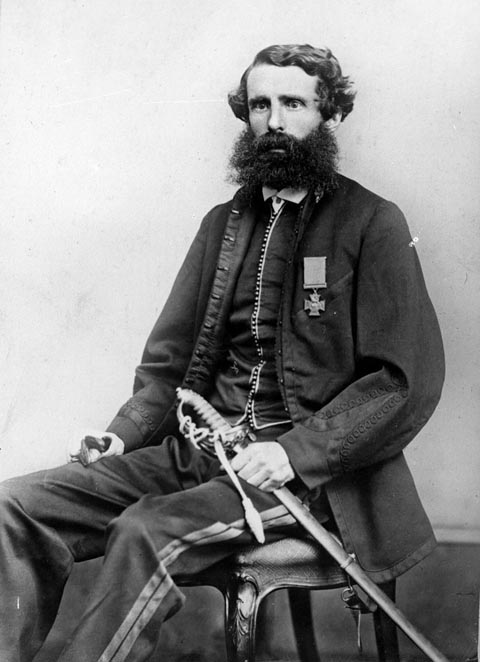 Charles Heaphy was born in London, England, probably in 1820, the youngest of five children. His father, Thomas Heaphy, was a professional watercolourist. Charles left home shortly after his father’s death in 1835, and in 1837 he entered the Royal Academy, and attended classes sporadically over the next two years.

Heaphy entered the service of the New Zealand Company on 6 May 1839 as a draughtsman, and was based at Port Nicholson (Wellington), employed as an assistant surveyor. In April 1840 he accompanied a company expedition to the Chatham Islands, and joined an exploring party which was to follow the west coast of the North Island as far as Ngamotu in Taranaki.

Heaphy returned to Nelson in 1842 and began a series of journeys into the hinterland. He accompanied William Fox, Thomas Brunner and Kehu, down the Buller River as far as the commencement of the gorge. Heaphy and Brunner the undertook an arduous journey down the West Coast as far as the Arahura River. It is clear that had it not been for Maori hospitality en route, the party would have starved during their mid winter journey.

In 1847 he applied for a post with the colonial government at Auckland andwas appointed a draughtsman in the Survey Office there. On 30 October 1851 he married Catherine Letitia Churton, daughter of a leading local clergyman, at Auckland.

He served in a number of public roles including Goldfields Commissioner. In the same year he enrolled in the Auckland Rifle Volunteers, being commissioned lieutenant in August 1863.

On 11 February 1864 Heaphy, under intense fire, went to the aid of a wounded soldier, at Waiari, near Te Awamutu; this led to his becoming the first member of an irregular unit to be awarded the Victoria Cross, at a parade held in Auckland on 11 May 1867. This award was the high point of his career as a public official.

His health collapsed in May 1881, and in June he and his wife sailed for Brisbane, where he died on 3 August.

Heaphy’s most enduring legacy is the body of topographical watercolours, portrait studies, charts and coastal profiles which he produced, mainly in the service of the New Zealand Company, during his early years in New Zealand. His depictions of company sites and settlements remain fresh and vivid, reflecting the eye of a young enthusiast firmly based in the English tradition of accurate draughtsmanship. His unforgettable, distinctly impressionistic ‘Mt. Egmont, from the southward’ has become in a sense a national icon.

Award of the Victoria Cross

For the action at Paterangi, Major General Thomas Galloway, the commander of New Zealand’s colonial forces, recommended Heaphy for the Victoria Cross (VC) in late 1864. The recommendation was supported by Sir George Grey (serving a second term as the Governor of New Zealand) despite being aware that Heaphy, and another man recommended for the VC for an action earlier in the campaign, was not in the British Army or Royal Navy. At the time, only personnel from the regular British military could be awarded the VC and thus Heaphy, as a militiaman, was not eligible. Grey argued that as Heaphy was under the effective command of British officers he should be made an exception. In London, the authorities disagreed and the recommendation was turned down. Heaphy refused to accept this and began to agitate, with support from Grey, Havelock, and General Duncan Cameron, commander of British forces in New Zealand, with the British government. He was eventually successful and on 8 February 1867, Queen Victoria made a declaration that the local forces of New Zealand would be eligible for the VC. The same day, Heaphy’s award of the VC, the first to a New Zealander, was gazetted. The citation read:

For his gallant conduct at the skirmish on the banks of the Mangapiko River, in New Zealand, on the 11th of February, 1864, in assisting a wounded soldier of the 40th Regiment, who had fallen into a hollow among the thickest of the concealed Maories. Whilst doing so, he became the target for a volley at a few feet distant. Five balls pierced his clothes and cap, and he was wounded in three places. Although hurt, he continued to aid the wounded until the end of the day. Major Heaphy was at the time in charge of a party of soldiers of the 40th and 50th Regiments, under the orders of Lieutenant-Colonel Sir Henry Marshman Havelock, Bart., V.C., G.C.B, D.L. the Senior Officer on the spot, who had moved rapidly down to the place where the troops were hotly engaged and pressed.

Heaphy presented with his VC at a parade at Albert Barracks in Auckland on 11 May 1867 and it is now on display at the Auckland War Memorial Museum.

Heaphy was initiated into the Ara Lodge No. 348 I.C. On 28 September 1871, Heaphy joined the Prince of Wales Lodge No. 1338 E.C. at the time of its formation and served as the first Treasurer.

The warrant of the Prince of Wales Lodge was damaged by rats whilst on its way from England and Heaphy was responsible for the repairs.